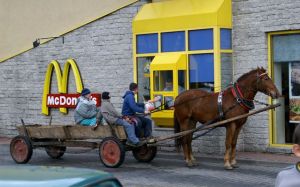 I was returning from New York, where I had enjoyed an off-Broadway production of my friend Marianne’s musical, McGoldrick’s Thread.  As I walked the 9 short blocks from the Lancaster train station to the bus station, I saw a “For Rent” sign on a nice looking building in a great part of town.  I copied down the phone number and called in the morning.

As soon as I saw the apartment I wanted it.  They say that there are three important things about real estate – Location, location, and location.  This was the perfect location for a guy like me who doesn’t drive.  It was close to the train station, close to the bus station, and there was a bar on the corner.

There were a couple other people interested in the apartment, but when I offered to pay several month’s rent in advance, I jumped to the head of the list.  So, I am now a Pennsylvania resident, but I’m still not ready to root for the Eagles, the Steelers, or the Phillies.  Moving the rest of the body is easy, but moving the heart is quite another thing.

Some other local customs will be easier to adopt.  One of these customs is called First Friday.  I was pleased to learn that First Friday is nothing like the Catholic First Friday of my youth.  Here, it means a pub crawl.  Many of the bars in town have musical entertainment, but on the first Friday of the month they all have something going on, and most of the town participates by going from bar to bar sampling the music and the beer.  They won’t have to twist my arm to do the neighborly thing on First Fridays.  I’d even be willing to extend it to second, third, fourth, and fifth Fridays.

When people from other places think of Lancaster they usually thing of the Amish and their horse-drawn buggies.  The locals think of themselves more as a musical community.  They even have pianos on some street corners, just waiting for anyone who wants to play.  There is even a public piano in the bus station.  Every once in a while, somebody good sits down at the keyboard, but usually it is just some children whose parents are glad to have something to amuse their children while they wait for the bus.

The bar on my corner is The Belvedere Inn.  They feature jazz every Friday and Saturday night.  It makes me think that this may be a good time for me to try my hand at the saxophone again.  I doubt anybody would pay to hear me play, but I could always get in a jam session at the bus station with the children.  Location…Location…Location.

Peace and Love and all of the above,