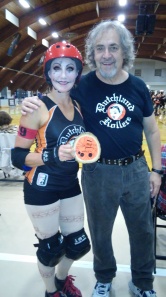 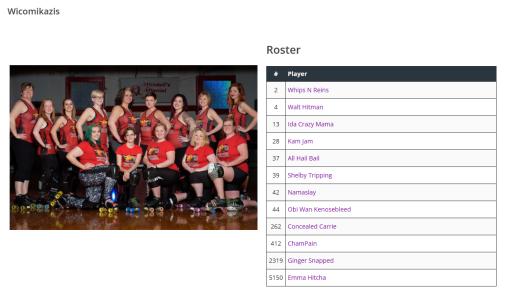 Two milestones were set last Saturday thanks to the local Women’s Flat Track Roller Derby.  Vanitti won her first MVP Jammer award, and I finally got my activity tracker to announce that I had successfully completed my goal for the day.  I don’t remember exactly what my goal for the day is, since I set it when I first bought the watch years ago, but I normally only hit about 35-40% of whatever that goal is.

On Saturday, The Dutchland Rollers competed against and defeated the Salisbury Wicomikazes from Maryland in the first match of “Monster Mashup Night.”  This was the third time I’ve attended the local roller derby, and it was easily the best.  I realized that it’s a lot like horse racing.  The more familiar you are with the athletes going around the track, the more interesting it is.  By now I recognize many of the Rollers, especially their two best jammers, Vanitti and Mega Pixel.  I also wound up cheering for one of the blockers on the Wicomikazi team, #13, Ida Crazy Mama.  (Far left in the team picture above.)  I kinda had to cheer for her, as her parents were sitting right in front of me.

At halftime, one of the other parents came over to me and asked me if I had a daughter skating on the team.  I know that she was being very tactful, because I’m probably older than most of the girl’s grandparents.  I told her that, No, I didn’t have any relatives on the track, I was just a Vanitti groupie.

In the 2nd match, continuing the Halloween theme of the evening, Witches Be Crazy defeated Ghouls Just Want To Have Fun.  Raggedy Aneurysm, #79, proved to be one of the stars for the Witches.  Ghengis Bon, #302, was my favorite Ghoul.  After that it was time to head home.  There was just one problem.  The bus had stopped running hours earlier.

I knew the bus schedule, and I had a plan for getting home.  It was a simple plan.  I knew from a Google map that the arena was just a little more than 3 miles from my apartment.  I would walk to the closest bar, have a few drinks, and then call a cab.  So, I started walking, and I quickly realized the flaw in my plan.  There weren’t any bars on that road.  It was a pleasant evening, so I figured I’d just keep walking until I got tired and then call a cab.  I made it all the way home.  The last three blocks seemed to take me almost as long as the first three miles, but I made it, and I felt good when I got home.  Tired, but good.

The next day I checked my activity tracker and found that I had reached my daily goal for the first time ever.  I had taken a total of 12,453 steps and completed 4.67 miles.  I took a few more steps to my recliner and spent the rest of the day there.  No sense pushing myself too hard.  I’ve got to save my strength for November 12th, when The Dutchland Rollers take on the Mason Dixon Roller Vixens. 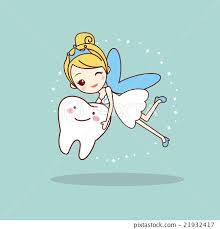 After I stuck out my tongue and said, “aaaah,” my doctor told me that I had a bad tooth in the back that would probably need to be extracted.  I told her that I would have it done as soon as possible, but I knew that wouldn’t be until after I cashed my annual annuity check in late September.  So, I forgot about it, until the tooth started to hurt, but that was about a month ago and I still had 3 weeks before the check came in.

So, I went to Plan B – shots of Jack Daniels with a Tylenol chaser.  That worked, and I forgot about the tooth again, even after the check came in.  Then last Thursday night it started to throb again, so I decided it was high time I made an appointment with the dentist.  By the time I got there on Friday, though, the Dentist office was closed, but the liquor store was still open and Dr. Jack was there waiting for me.  That got me through Friday night and Saturday, but by Sunday an infection set in.  Nothing helped, so I was at the dentist early on Monday morning.

They took x-rays, gave me an exam and the dentist said, “That tooth in the back, #31, needs to come out.

“I’m ready,” I said, smiling for the first time in days.

“Are you on any medication?

“Problem,” I said, losing the smile.  “What kind of problem?”

“If you’re on blood thinner medication, I need your doctor’s approval before I can do any kind of oral surgery.”

“No problem.  My doctor is two blocks away, and she told me that the tooth should be extracted.”  So, I took the form that needed to be signed and hustled over to my doctor.  The receptionist took the form, looked at it, and said, “We’ll call you when you can pick it up.”

“Any idea how long that will be?

“I can’t wait that long.  I’m in pain.  Surely, you can expedite it somehow.”

The receptionist took pity on me, and called the doctor.  She turned to me and said, “She’s at lunch now, but I’ll give her the form as soon as she returns, and I’ll call you when it’s ready.”

“I told you that I would call you when it was ready,” the receptionist said.

“That’s okay.  I don’t have anything better to do.  I’ll just wait here.”  The Tylenol was kicking in, so the pain was subsiding, put I tried to keep my severe toothache face on, hoping that would speed up things.

After an hour went by, she went back to the doctor’s office to see if the form was ready.  It wasn’t.  After another hour slowly ticked by, I asked her to check with the doctor again.  She called my doctor, who told her that she was busy with patients and that she would handle it in the morning.

I snapped.  It didn’t help.  The squeaky wheel wasn’t getting any grease today.  I went home fuming.

The next morning, I got a call from the doctor’s office.  The form was ready.  I hustled over there and took it straight to the dentist.  The receptionist read it and in the details section my doctor had written that if the dentist preferred, I could come off Plavix for 7 days.  I told her that I wasn’t waiting 7 days.  She went to talk to the dentist.  The dentist said that as long as my doctor had signed the release form that was good enough for him.  I got an appointment 1 hour later.

A young man who just passed the bar did the prep work.  He’s also working on a screenplay, so we had a lot to talk about while he held a Q-tip dipped in a local anesthetic on the tooth.  When the tooth was numb, the dentist came in.

“Now, I’ll give you a shot to really make you numb.  You’ll feel a little pinch.”

He was right.  I felt a little pinch as he gave me some shots of what I assume was Novocain.  We waited a bit for it to kick in and he said that he would now give me a shot of something even stronger, because of the infection.

“No problem,” I mumbled.  My mouth was fairly numb.

“This is really gonna hurt,” he said, “because of the infection.”

“Bring it,” I said boldly, feeling that I already had enough Novocain in my system to neutralize any pain.

We waited a little bit longer and he said that he was now going to perform the extraction.  He said that because of the infection it was really going to hurt.

“As much as that last shot?”

“No, more.  This is going to feel like you’re giving birth.”

I didn’t believe him, even though he had been totally honest with me about everything else.

He chuckled and went to work.

The pain was excruciating, and my eyes pleaded with him to stop.

He tried to encourage me to hang on just a bit longer.  “It’s crowning.”

I wondered how any woman ever allowed herself to get pregnant a second time, as he continued to wrench away at the tooth.

“Get it out,” I wanted to scream but my mouth was full of dental tools and dentist fingers.

“Get it out,” was my only thought.

Then, plop.  “It’s a boy,” he said, as he cast the offending tooth into the garbage.

“I think I’ll call him Hitler,” I managed to mutter.  “Now, please don’t tell me I’m having twins.”

An x-ray showed that there was no part of baby Hitler remaining.  So they packed the wound, gave me instructions to just sit quietly for the rest of the day, and sent me home.

I went home, propped myself in bed, and listened to a stack of audio books.  8 cd’s later I was asleep.

I woke up this morning feeling good.  The pain is gone.  The swelling is going down.  Good bye #31.  You served me faithfully for 60 plus years, but I’m not going to miss you.