Calvin and Hobbes by Bill Watterson is one of my favorite comic strips.  Maybe it’s because I see so much of myself in Calvin, and, like him, I don’t plan to change in the new year.  I made up a life-changing resolution a long time ago, and I continue to say it to myself every day.  So, instead of an annual New Year’s Resolution, I have a daily resolution that has been guiding me for decades.  I’ve shared it with hundreds of people in my children’s book, A Little Bit Better, and today I would like to share it with you.

Thanks to the things I did yesterday,

Today I am better in every way.

I love myself with all my features.

I love the world with all its creatures.

I set great goals and I get them done.

I find many helpers, and so it is fun.

I’ll use this day wisely and go with the weather. 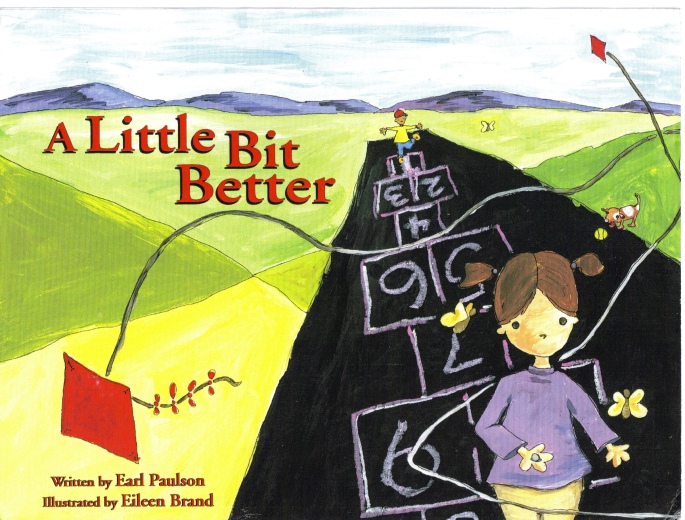 May 2019 be a little bit better to you than previous years, and may you be better in 2019 than you’ve ever been.

Last week the local Susquehanna Valley oldies station, 96.1 FM SOX Radio, had their own “Santa D.” in a big booth at the Wrightsville Columbia Bridge collecting toys for underprivileged children.  Their goal was to collect 7500 toys.  “7500 toys,” I thought, “heck, my New York friend Marianne could probably gather that many new toys overnight.  She’s the leader of a large network of New York Do-Gooders, who manage to turn a whole lot of bad situations into great fundraisers.  Marianne just goes on social media and posts something like, “If anyone would like to contribute toys for underprivileged children [or it could be books for Africa, household goods for Appalachia, bleach, food, and water for victims of Hurricane Sandy, toiletries for veterans, or whatever itch needed scratching in some part of the world], they can just leave them on my porch.…and I’ll deliver them.” Overnight, her front porch would become The F.A.O. Schwartz of toy stores or a warehouse of whatever stuff they were collecting for the cause they were helping that day.  But that’s not the point of this story.

The point is that the toy drive was being held at the historical site of one of the most famous bridges in Civil War history, the Wrightsville Columbia Bridge, which, back then, was a covered bridge.  There are plenty of covered bridges out here in Amish land, and I asked around to find out why.  I learned that the main reasons they were covered was to weather storms, and to prevent the horses from seeing the rushing water and being spooked while crossing and possibly falling into the river.The current bridge, the fifth edition of the grand structure, is not a covered bridge like its predecessors.  It’s not even called the Wrightsville Columbia Bridge anymore, except by locals.  U.S. maps call it the Veteran’s Memorial Bridge.

The first Wrightsville Columbia Bridge was destroyed by severe weather.  The second Wrightsville-Columbia Bridge, completed in 1834, is the one that made history.  Besides being the longest covered-bridge in the world it was “stout enough to bear loaded train cars.”  I wondered how many of the people who travelled across the bridge to give toys, knew the history of the bridge itself.  As a native New Yorker, I was completely unaware of the significance of the Wrightsville Bridge in the Civil War until recently.

Most of the Civil War battles were fought in the South.  The leader of the Confederate Army, Robert E. Lee, hoped to get England and France to enter the war on the side of the South.  So, he instructed his generals to attack the North, hoping to impress the European countries.  The Rebel army advanced.  The Confederates won at York, Pennsylvania, and were about to cross the Susquehanna River into the City of Lancaster on the way to the Pennsylvanian capital at Harrisburg.  If they crossed the Susquehanna, things would not be good for the Union.

The small Pennsylvania militia could not halt the advancing army, so they tried to blow up the bridge with dynamite, but it was like a scene straight out of the movie, The Bridge on the River Kwai.  The bridge was so well-built that it was not so easily demolished.  So, on June 28, 1863, the Pennsylvania militia wound up soaking it with oil and burning the bridge.

The local people of Wrightsville and Columbia gave up their bridge to save the cities of Lancaster and Harrisburg, and, as it turned out, the Union itself.  With no way to cross the mile-wide Susquehanna River, the Southern troops heading north poured into the Gettysburg area.  The Army of the Potomac met them there a few days later on July 1, 1863, and they fought one of the bloodiest battles of the Civil War at Gettysburg.  Casualties were high on both sides, but Lee lost a third of his Southern army.  The battle of Gettysburg, followed by Lincoln’s inspirational Gettysburg address turned the course of the war for the North.

It is very fitting that the site of the Wrightsville Columbia Bridge, which gave its all for the Union in 1863 was the site of so much gift giving this holiday season.  Happy Holidays to all.