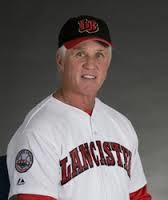 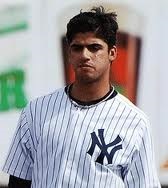 I received an invitation in the mail to attend a little birthday party for the Manager of the Lancaster Barnstormers, Butch Hobson. R.S.V.P.

Then my brother called. What were my plans for celebrating my birthday?’

“Right now I’m planning on going to a ball game and having ice cream with Butch Hobson on his birthday, which is on the 17th, just two days before mine. Close enough.”

Then I started singing, “They say it’s your birthday…It’s my birthday, too, yeah…

I called Maureen Wheeler at Clipper Magazine Stadium, explained my situation and asked if I could have my invitation “plus-oned.”

The ballpark seats about 15,000, but the only time it is more than half-full are some Friday and Saturday night games when they have free fireworks. The rest of the week, they give out free T-Shirts, reduced-priced food, prizes, anything to try to attract customers. They’re very accommodating.

I was in Long Beach a few days later telling my friend Margaret about my plans.

“It sounds good,” Margaret said. “It would sound fabulous if you were only nine years old.”

I thought about that for a moment. “Margaret,” I finally replied. “I will be going there like a nine-year old. I’m going to the game with my little brother.”

BeelzeBro X (formerly Brother X) arrived on Saturday afternoon. We had a drink in The Social Butterfly Saloon (formerly my back yard). Then we went to The Alley Kat for Dinner. After a while there we just came back to my place to chill. We watched a few Harness Races on the computer, because I’m a big fan of Harness Racing, and we watched a little TV, because we’re both big fans of closed-captioning.

He got up first on Sunday. He had to go to mass.

Myself, I’ve been going to services at Saint Mattress for nearly 50 years. I stayed in bed.

When he came back two hours later, he was an expert on my neighborhood. He knew more about it than I did. I suggested we have breakfast at the Onion Café. He said that it was closed on Sunday, but that the Fractured Prune was open and they had great coffee. We went to The Fractured Prune, which was just a little past the Onion Café, which was closed.

He even knew how The Fractured Prune got its name. I’ll leave that story for him to tell someday.  It has nothing to do with fruit.

It was then time to go to the ball game. We used to go to baseball games together back when we were Cub Scout age. We even had Yankee uniforms. He wore #8 for Yogi Berra, and I wore #7 for Mickey Mantle. Magically, as soon as we handed our tickets to the usher at the Barnstormer gate we were both that age again. Only this time we could drink beer. Hey Margaret.  We could have even more fun than 9-year-olds.

The day was dedicated to helping homeless Veterans in Lancaster County. The players wore special patriotic caps during the game, which were auctioned off during the 4th inning. After the game, whoever bought a hat went onto the field to get their hat from the player.

I bought it for several reasons.

His last name is a beer, and that’s one of my favorite beverages.

He just joined the team from a Yankee farm team.  So, nobody knew him, and the bidding wasn’t very spirited.

I got his hat for $30. That’s more than I ever paid for a hat before (unless you count enlisting in the Navy). And it’s certainly more than I’ve ever paid for a Corona, but it was a steal. He scored the winning run in the bottom of the 11th inning.

Suddenly, as he was driving away, I was no longer 9-years old, but, at least, I could still drink beer. I went to the Alley Kat and had a Corona.  M-m-m-m-m-my Corona….