I wrote this story last week, but with the Library being closed I didn’t have any internet access.  So I ordered a mobile hot spot, and I just got it activated.  I’m back on the grid.

In 1965, I was walking along Rockaway Boulevard when suddenly all the lights went out. Most of the Northeast and parts of Canada lost power. I went to see Tommy Powers and Donnie Mazurkiewicz, my two best friends. We spent most of the night in Tommy’s basement on 132nd Street listening to radio broadcasts on our transistor radios. The city came together that night. Citizens were directing traffic, and traffic flowed smoothly. Good Samaritans were everywhere. Everyone was getting along with everyone. People were helping one another. The City was having a grand celebration of itself, with everyone eating all the ice cream that was melting in the freezers across the city. The three of us were stuck with nothing to do but listen to our radio in a basement in South Ozone Park.

In 1977, I lived in Jersey City, and there was a blackout. I immediately jumped on a bus to N.Y. I wasn’t going to miss all the fun, this time. Unfortunately, that was the year that looters and rioters grabbed all the headlines. You win some. You lose some. I do remember one happy moment, though. I was sitting by a big square water-filled fountain. The water was still. The entire area was pitch black. I looked at the reflection in the water and turned to look up. I saw a night sky that was as brilliant as anything the Hubble spacecraft has ever photographed. Without the lights of Manhattan overpowering them, thousands of stars beamed brightly overhead. Thousands and Thousands. Millions. Billions even.

I went to New York on Friday the 13th this year for the annual party Marianne and Tres throw each year around St. Patrick’s Day. Unfortunately, the party was cancelled as a precaution, since Covid-19 is poking its unwanted ugly face everywhere. So, this trip, I spent some time in Manhattan. The stars were not out this time, not in the sky or on the Great White Way. The threat of Covid-19 caused the cancellation of every show on Broadway, and a Billy Joel concert at Madison Square Garden. So, I’ve witnessed the lights being out on Broadway, twice now, but this time the problem was bigger than the lack of electricity.

Some Television shows tried to continue without an audience on Friday, but most just went to re-runs immediately. Eventually, they all closed-down production for safety’s sake. March Madness was cancelled. All sports are closed. Yonkers Raceway is closed even though their attendance can’t be more than a handful of people, who wandered from the casino and got lost.

So, with no shows to watch, the audience went shopping, and they bought toilet paper, lots and lots of toilet paper. They were also looking for Purell and face masks, but those items have been out of stock everywhere for weeks. TV News cameras on every station featured zoom-in shots of bare shelves in the toilet paper aisle.

There weren’t nearly as many people on the streets of Manhattan, as there usually are, and half of them were probably just out looking for toilet paper and Purell. Remember that old Wendy’s commercial, “Where’s the beef?” Competitive toilet paper manufacturers will probably be running “Where’s the toilet paper?” ads soon with a hologram of Clara Peller. 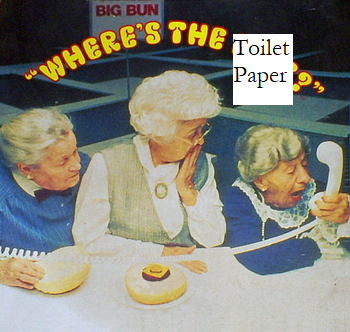 Because of the consequences of Covid-19, the stock market faced a huge drop, and even God’s stock took a big hit. The Catholic Church excused all their members from church for three weeks. I guess that collection plates will probably be mailed to their houses.

Among the party people, I noticed that kissing, shaking hands, and even fist bumping are all “out” now as forms of “hello.” Elbow bumps are the “in” way to greet friends, and now, when people want “elbow room,” they mean six feet. All touch is with the elbows, even though that is where you are supposed to sneeze now. The hands are shunned for everything. The bartender asked me if I wanted another drink, and I said, “Twist my elbow.” In the old days, that might have gotten a laugh. People are very serious now, though. Nobody is passing around joints anymore, either. Everybody just Bogarts their own.

My return train trip home was cancelled three times by Amtrak before I finally found a train going to Norfolk that stopped in Philadelphia, where I was able to connect with a train going to Lancaster. Despite the cancellation of half the scheduled runs, the trains are still practically empty, though. The 6-foot social distancing guideline, that is becoming so popular, was easy to maintain. And the trains have to be clean, even if the company is doing nothing, since just about every passenger wiped down their entire area with bleach wipes before they sat down.

So, now I’m back home, and the state has closed down all the liquor stores. Oh Covid-19, now you’ve gone too far.