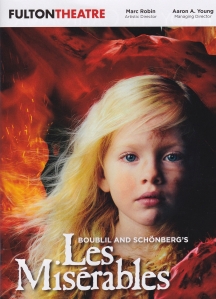 So, the next time I bought tickets to a show, I told the ticket seller that my girlfriend had a weak bladder and we needed aisle seats near the bathroom. The ticket teller put us in a special section, where she said that we could get up any time we wanted. Cool.

Before the show, Debbie took me out for dinner at a nice pub near the theatre. She informed me that she wasn’t gonna drink so she wouldn’t have to go to the bathroom. Then I told her that our theatre seats were very bathroom accessible, and she immediately ordered us a pitcher of beer. After we poured out the first two glasses from the pitcher, the barmaid filled a plastic cup with ice and floated it in the pitcher. It kept the beer cold all the way to the last drop.  All my years of drinking, I never thought of that.  (Though I often thought about resting my beer in a Slushie at the Ballgame.)

After dinner we walked to the theatre, and it turned out that we were in the handicapped section. Great seats, in a private section, 16th row center. There was only one problem, there were handicapped people in our seats.

“No, you get the seats you paid for,” she told us as she rousted a group of blind people out of our seats and off to where they belonged. It was quite the production, as they shuffled off blindly looking for their seats. Debbie and I were slightly embarrassed, but grateful that at least the blind people couldn’t see us. They probably figured that we must have been in wheelchairs or something, because they didn’t grumble when they had to move.

The seats were excellent, not theatre seats but padded chairs that weren’t bolted to the floor. We easily had enough room around us to maneuver wheel chairs, so we were able to stretch out and get real comfortable. The show was excellent too. I had seen Les Miserables before on Broadway, but I actually enjoyed this performance more. It helped that they had a special screen off to the side that displayed the words as they were being sung. So, I was finally able to understand what was going on.

I had always assumed that Fantine’s “I Dreamed a Dream” was a happy song. When I saw Susan Boyle sing that song on Britain’s Got Talent, it brought the audience and judges to their feet. Now I was able to read the lyrics and I learned that it was a very sad song about dreams dying. A lot of the great songs in the show were sad songs, but at least now I know how to keep my beer cold on a hot day while I’m listening to the soundtrack. So, Fantine’s dream may be dying, but my dreams are coming true.

One thought on “More Miserables”