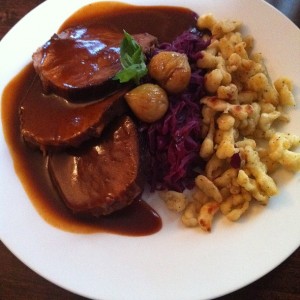 I frequently travel back to New York to visit with friends and family. I usually plan my trips so that I visit as many people as possible. I didn’t have to make people plans this time, though, because half the people I know in New York would be at the Driscoll’s annual St. Patrick’s Day Party. So, I made menu plans instead. I’ve been eating a lot of fish and chicken here in Lancaster. It was in the mood for some of my favorite marinated meats, Corned Beef, Pastrami, and Sauerbraten.

I only ever cooked a corned beef just once in my entire life. It took three long hours to cook. It tasted great, but, after that, I chose to only eat corned beef that somebody else spent three hours cooking. My favorite corned beef sandwich was the special corned beef sandwich they served at a bar in Secaucus, NJ called Charlie’s Corner. The special, which ran all day and all night during St. Patrick’s week, was a corned beef Sandwich and a pickle for a nickel. Of course, you had to eat at the bar, the take-out price was much higher. Charlie once told me that he would go through two tons of corned beef that week.

Corned beef and a pickle, for a nickel. You couldn’t beat that. Almost. The spread that Marianne and Tres put out for their Patty’s Party, was even better. So, in honor of St. Patrick’s Day, I started my meat parade with corned beef at their party. Delicious, and the best part is that I didn’t have to spend 3 hours in the kitchen.

Another pickled meat I love is Sauerbraten. That’s even more labor intensive. It takes two days to make, so I never made it. Fortunately, I had the best sauerbraten in the world at least once a year when my mother was alive. Since then I’ve had to settle for the pot roast in sauerbraten sauce that most German restaurants serve. My friend John in Long Beach tells me that the new German restaurant in his neighborhood makes a mean sauerbraten. So, that was on the menu for Sunday.

Das Biergarten is a place that looks like a small beer hall in Bavaria. The waitresses are costumed to look like those darlings who carry so many pints to the thirsty tourists at Oktoberfest. I remember the place from many years ago when John and I used to go there to wet our whistle. Back then, it was called The Digs, and it was decorated more to look like a bar. The old and the new quickly became one in my mind, and I started calling the place, Das Digs.

The first appetizer on the menu is Das Pretzel. That made me laugh, so I ordered one. Then we got down to the serious business, the Sauerbraten. It was delicious. Not as good as my mother’s, of course, but delicious. Two meats down, one to go.

New York Pastrami is the very best. The owner of the Alley Kat Restaurant in Lancaster used to drive to the Carnegie Deli in New York every week to pick up 60 pounds of it. This winter, he got tired of making the drive, so pastrami was dropped from the menu. I was Jonesing for some juicy pastrami, so I made sure that my train reservation on Monday was for a late train. This gave me all afternoon to go to the Blarney Stone, just a few steps from the train station. The pastrami sandwich was thick, lean, and delicious. The beers went down pretty smooth, too. I rolled out of there just in time to catch the train home.

The next day when I got on the scale, I was 6 pounds heavier than I was when I left the house on Saturday morning. Now I remember why I’ve been eating fish and chicken.

I hope everyone had a Happy Healthy St. Patrick’s Day.

5 thoughts on “Bring it, Meat”