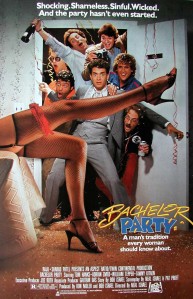 My nephew’s Bachelor Party was last Friday.  I wasn’t invited.  None of the old guys were.  We were, instead, invited to a Bachelor’s Dinner, the following night.

I had about 3 hours to kill when the Amtrak train arrived at Penn Station, so I went to the movies and saw Spy with Melissa McCarthy.  It was a funny action adventure movie, but this isn’t a movie review.  Let’s get to the Bachelor Dinner.  I arrived at Tony DiNapoli’s first and found a seat at the bar where I ordered a beer.  Then Brother X and his friend Charlie arrived. They sneered at my beer and ordered more manly drinks.  X, the Father of the Groom, had his usual Bourbon on the Rocks and Charlie, a retired FBI agent, went with a Vodka Martini.

We had another round before the Father of the Bride showed up with the Groom and his entourage of 10 guys leftover from the previous night’s Bachelor Party.  All present and accounted for, we were led to our table in the party room in the basement.  We passed tables of young ladies having a Bachelorette Dinner, and other tables of people celebrating something.  Next to us they were celebrating Laurie’s 50th Birthday party.  They had 6 women and 4 men at the table.  We had 15 guys at our table.  I chose the seat nearest their table, and nearest the 2 women who weren’t sitting next to husbands.

The young guys at our table were talking about an upcoming Track & Field meet.  My brother’s son, the Groom, is a high-school teacher and a track coach.  To be polite, I asked Charlie what he had been up to.  He told me that he and my brother just gave blood.  That was enough polite chit chat with our group for me.  I turned my attention to the birthday party.

“It looks like somebody is having a birthday,” I said to the prettiest single girl at the birthday table.  It’s not a very brilliant opening line, but it was good enough.  She started talking to me.  “We’re celebrating Laurie’s 50th birthday party,” she said.  Maybe she said Lauren’s birthday.  The room was a little noisy, and I didn’t want to admit right away that I was hard of hearing.  It was bad enough that I was old enough to be her father.  A listing of my ailments and medications wasn’t going to impress her.  I hoped that maybe they’d been there a while and had a few drinks.  Maybe more than a few drinks.  That was the only way I would have a chance with her.  Then she might at least think I’m funny.

Her name was Nicole and she’s a Captain in the NYPD.  She told me that she used to work undercover in Vice.

“That’s why you look so familiar,” I exclaimed.  “I think you arrested me a few times.”

She laughed.  She was very friendly and chit chatted away with me.  Then the other shoe dropped, the reason why this pretty woman was being so friendly to me.  She was looking to find a date for her friend Sophie, sitting to her right.  Sophie turned and smiled at me.

“Nice meeting you,” I said politely to her slightly less-attractive friend.

“Very nice meeting you, I said even more politely, as Sophie blushed.

Before long I was sitting at their table, wearing a pointy birthday hat and joking that I would take Sophie as my plus one to my nephew’s wedding.

As the Bachelor Dinner was breaking up, my brother came over to see why I had deserted them.  I introduced him to Nicole and Sophie.  When Nicole found out that Brother X’s daughter was a Lieutenant in the Police Department, she practically offered her a job on the spot.  She was looking for a new Lieutenant in her department.  She gave him her phone number to give to his daughter.  I did all the work.  He got the digits.  Damn, I’m slipping.

So was Charlie.  He walked out of the bathroom and his legs collapsed under him.  Down he went.

Everyone at our table rushed over to help him.  I excused myself from the party table joking, “I’ve got to go check on Charlie.  He’s the designated driver.”

Eleven strong boys carried Charlie upstairs and out of the restaurant.  We hailed a cab, and my brother and I took Charlie to Penn Station to catch a train home while the boys, now well-fed, were free to resume the Bachelor Party.  We practically slid Charlie down the 7th Avenue escalator, and then down the next escalator to the LIRR Level.  My brother leaned Charlie against a pole, while I went to check the big board to see what track we needed to get to.

I was still wearing my pointy party hat and Brother X yelled out, “Hey Conehead.  Happy Birthday.”  Then he started singing Happy Birthday.  I encouraged the crowd to join in, and it looked like a Flash Mob as hundreds of people sang Happy Birthday to me.  That was the fun part.  When they announced that our train was on Track 16 and we had to get Charlie down the steps, well, let’s just say that wasn’t nearly as much fun.  Charlie’s legs gave way on the very first step.  We kept him from falling down the steps but were unable to lift him and the crowd was building behind us.  A couple muscular guys helped us get him down the steps.  There was no room on the train, so we propped Charlie against a pole to wait for the next train, but he slid to the ground.  Within minutes a half dozen cops arrived to see what was causing the commotion.  One of the cops looked at my party hat and asked if we had been drinking.  I didn’t think he would believe it if I said I was a Shriner doing late-night charity work, so I told him, “Of course I was drinking.”

“Was he drinking,” he wanted to know as he pointed to Charlie.

“I don’t think so.  He gave blood today.  I think it may be a reaction to that.”

Charlie pulled out his FBI badge and things mellowed.  Now it looked like they were more interested in getting us out of there than arresting anyone.  I asked if I might be allowed to use my phone to get a video of the scene for a YouTube video.  They didn’t think that was funny, and now they were really interested in getting us out of there in a hurry.  We had already missed our train, so they got on the radio to see what platform we had to get to for the next train.  They commandeered the elevators and whisked us to the next train.

We hoped that Charlie would be able to walk by the time we got to our destination.  He wasn’t.  Fortunately, a couple muscular guys helped us get him to the car, and we drove right to the emergency room to get him checked out.  Turns out he was just dehydrated from giving blood.  So they hydrated him and sent him home.

So, the supposedly quiet Bachelor Dinner turned out to be quite exciting.  I can’t wait for the wedding.  I just hope that Sophie doesn’t turn out to be an undercover vice officer.

One thought on “One Down, One to Go”