“…All the cats want to dance with Sweet Little Sixteen…” 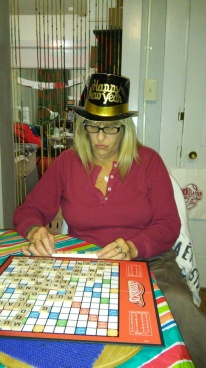 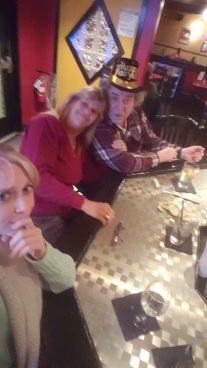 In 2015 American Pharaoh won the Triple Crown. So, it is only fitting that I had my own Triple Crown this year.  I celebrated Thanksgiving and Christmas early in 2015, and I completed the triple by celebrating the New Year early, too.  Normally on December 30th, I celebrate the anniversary of my friends Marianne and Tres.  This year I also celebrated New Year’s Eve on that day.

I’ve been poking around the apartment for the past month or so looking for the kitty litter buckets and cardboard boxes that contain my December storage items, which include my Christmas decorations.  I still haven’t found anything, but I did find my “January” storage items which included two New Year’s hats and some noisemakers.

I thought it would be interesting to go out on the town on the evening before New Year’s Eve wearing the Happy New Year Hats.  What would the crowd reaction be?  This would be fun, I thought, but I couldn’t do it alone.  I needed an accomplice.  Immediately I thought of Debbie.  She’s crazy.  She’ll do anything.  So, I invited her over to play Scrabble.  We put the hats on and proceeded to get drunk.  Then we went to the Alley Kat.

The reaction was great.  Even though just about everyone told us that we were a day off, they quickly joined in the fun.  It turned out to be the perfect ice breaker.  The Alley Kat is more of a restaurant than a bar.  Most people go there to eat, not converse with strangers, so it was a bit unusual to have everyone at the bar joining in the conversation.  Pretty soon we were taking selfies together and wishing each other a “Happy New Year.”  There weren’t a lot of people, but that was nice, too.  You don’t need to be packed in like the sardines in Times Square to have a good time.

I would like to point out that I was not drinking from the water glass which you see in front of me in the picture.  I don’t want to tarnish my reputation as a party animal.  My beer was just out of the frame.  That’s Debbie’s water.  Knowing that she has to drive home, we both make sure that her last few drinks of the night are water.

We left the bar at 11:30 to watch TV and sober up some more.  I don’t think we made it until midnight, but that’s one of the benefits of celebrating early.  No pressure.  The next night, on the real New Year’s Eve, I was content to sit quietly and watch the ball drop on TV without feeling like I was missing out on something.  I had already celebrated the New Year on Australian Time.

I hope everyone had an enjoyable New Year’s Eve, and I hope you all have a Happy, Healthy New Year.

One thought on “Sweet Little Sixteen”