Chekhov’s gun is a dramatic principle that states that every element in a story must be necessary, and irrelevant elements should be removed; elements should not appear to make “false promises” by never coming into play. If a gun is shown in act one, it must eventually be fired.

Back in the early days of television, one of our family’s favorite TV shows was Perry Mason. The brilliant defense attorney always got his client off as he revealed the real guilty person in the last few minutes of each show. My mother was never surprised. She would always tell us the guilty person, right before Perry revealed it.

“How did you know that?” we would always ask her incredulously.

“I wrote that show,” she would smile and say. Only the absence of royalty checks led us to disbelieve her. Many years later she revealed the truth. The writers of the Perry Mason show were strict adherents to the Chekhov’s gun principle. There was never anything in the story that wasn’t a necessary element. So, any character who appeared that did not seem absolutely necessary to the story, would eventually be found to be the guilty party.

A good mystery should contain enough clues throughout the story that the reader will wonder why they didn’t guess the solution before it was revealed. A bad mystery won’t give the crucial clue until a page or two before the solution is given. Some mysteries are allowed the literary device of “red herrings,” or false clues, to mislead the reader, but otherwise, there should not be elements in the story that are brought up and then just forgotten.

The number one bestselling book of all time has been guilty of violating the Chekhovian gun principle. The Nativity story in the Bible, for instance, tells of the three Magi bringing gifts to baby Jesus. They bring gold, frankincense, and myrrh. The Bible never tells what the Holy Family did with these three gifts. It’s a loose end that is never tied up. There are also many years in Christ’s life that are omitted from the Bible story of His life. What happened after He turned 12 and disappeared for 18 years?

I think I have solved those two mysteries and, in doing so, I may also have solved one other mystery that has puzzled women for years.

First, a recap of the Bible story.

Three Kings of Persia, who were heavily influenced by Astronomy, spotted a new star, which they believed meant that a new King had been born. These kings, known as the Magi, loaded their caravan with supplies and gifts for the new king and headed west following the star. When they arrived at the area directly beneath the star they searched all the finer hotels in the area looking for the new king. When they could not find any new king at any of the swank places, they went to the current King, Herod, to ask him for directions to the new king’s whereabouts. Herod was surprised to even hear that a new king had been born and was secretly determined to kill him before he could assume the throne. He told the Magi that he did not know the whereabouts of this new king, but he would very much like to pay honor to him if the Magi would just return to Herod after they found the new king and let him know where the new king lived.

The Magi continued looking for the king foretold by the star and eventually found him in a stable in Bethlehem. They gave him the three gifts, which were the standard gifts for kings of that time, gold, frankincense, and myrrh. The gold obviously represented precious metal. The frankincense was a perfume, and the myrrh was an anointing oil. 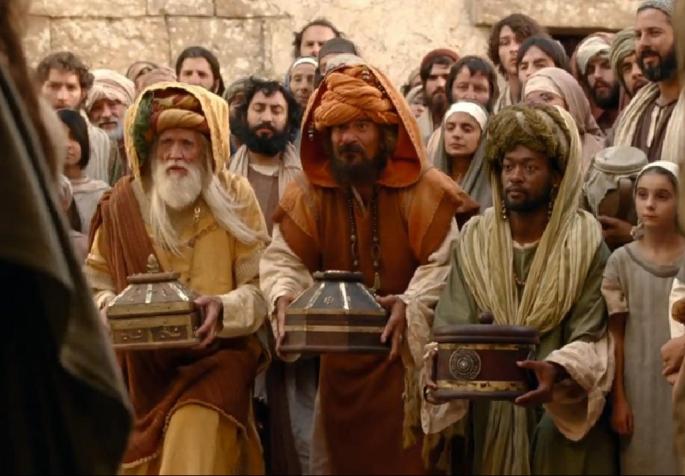 Then they had a dream which showed them Herod’s true plan was to kill the new king. So, they did not return to Herod’s palace. They took a different route home. Then, since Herod didn’t know who the new king was, or where he lived, he decided to take no chances, and he ordered his men to kill every male child in the area under the age of two. This was known in history as the Slaughter of the Innocents. Joseph, Mary, and Jesus escaped by fleeing to the safety of Egypt.

So, therein is the answer to a mystery that has puzzled women for ages. Why won’t men ever stop and ask for directions?  It was because of what happened to all those unfortunate young boys after the Magi had stopped to ask Herod for directions. Ever since then, wise men have never asked for directions again.

Now I’ll tell you what happened to the gifts of the Magi and where Jesus was between the ages of 12 and 30.

Mary and Joseph saved most of the gold. They had to use some of it to pay off their stable bill and also to pay for their trip to Egypt, but when Jesus turned 12 Mary, being a Jewish mother, used all the remaining gold to pay for Jesus to go to a Medical school in the desert. While there, Jesus learned that in addition to being a sweet smelling fragrance, frankincense, sometimes referred to as olibanum, which comes from the Boswellia Serrata tree, is also a common type of essential oil used in aromatherapy that can offer a variety of health benefits, including helping relieve chronic stress and anxiety, reducing pain and inflammation, and boosting immunity. I use it today to relieve my hip pain.

Myrrh, Jesus learned, was not only an anointing oil, but can be applied directly to the mouth for soreness and swelling, inflamed gums (gingivitis), loose teeth, canker sores, bad breath, and chapped lips. It is also used topically for hemorrhoids, bedsores, wounds, abrasions, and boils.

So, after 18 years of medical school, Jesus came out of the desert, hung up his shingle, and became Israel’s most famous herbal healer. He cured folks for miles around. He brought sight to the blind and even had a good bit of success with lepers. Some even claimed that he was so good that he could even cure dead patients.

I hope that clears up some of these mysteries for you.

Oh, and the 40 days He later spent in the desert.  That was to get his herbal prescriptions filled.