This past weekend I went to Ohio to celebrate my Aunt Miriam’s 85th birthday. They drew straws to see who would put me up while I was in Ohio. Miriam’s son Paul and his wife Cindy lost, so I stayed at their house. I used to think the Bible Belt was just down south. To my dismay, it’s gotten wider. It now goes all the way to my Aunt’s house. She and her late husband George were both good Catholics, and like all good Catholics, they had a bunch of kids and grandkids. The party was just for family and they still had to rent out a public park to have room for everyone. It looked like one of those Christian revival meetings. I was the token Atheist. 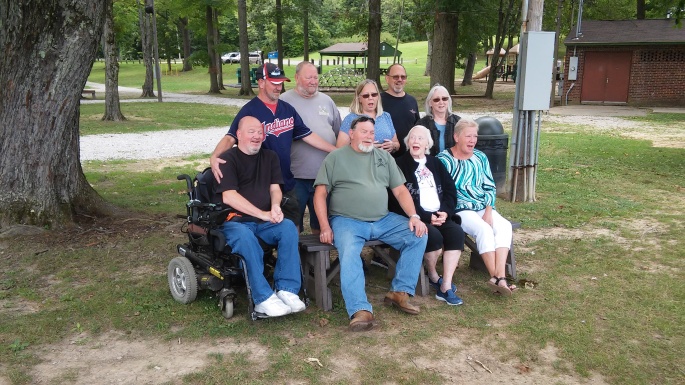 The birthday girl and her kids.

Naturally, I couldn’t resist telling everyone at the party that they were completely wrong about God. Naturally, they couldn’t resist beating the crap out of me with their crosses and Bibles. Only kidding. They were very non-violent, but I did see a few of them taking the safety off their guns. They took turns telling me about their own personal conversations with Jesus. I told them that talking to God was fine, but that when God talks to you, that’s a sign of mental illness. They started praying for me. “Bless us, oh Lord, for the food we are about to receive, and please aim carefully if You decide to throw lightning bolts at Cousin Early.”

They gave up trying to convert me, but that didn’t stop me from telling any Jesus jokes I could remember. Did you hear about the burglar who thought the house he was robbing was empty, but then heard a voice repeatedly saying, “Jesus is watching you.” He got scared until he saw that a parrot was doing the talking. “I suppose you’re Jesus he said.” “No,” squawked the parrot, my name is Moses.” The burglar laughed. “What kind of an idiot names their parrot Moses?” The parrot replied, “The same kind of idiot who names their Rottweiler Jesus.”

Okay, this wasn’t the right audience for Jesus jokes. Who wants to talk Politics?

To my surprise, I wasn’t too much further to the left than most of them, except maybe on the issues of Gun Control, Immigration, the Death Penalty, the Economy, birth control, abortion, outsourcing jobs, separation of Church and State, the Wall, and, well, just about everything else. The only thing most of us agreed upon was that, contrary to whatever historians may say, James Buchanan was not the worst President we ever had. There was a new title holder currently residing in the White House.

Okay, so no more Jesus jokes or political talk. That still left me with me with plenty to talk about. Who wants to hear about Harness Racing, the Lancaster Barnstormers, or Women’s Flat Track Roller Derby?

Thanks for coming, Early. We’ll be sure to invite you to the next family function.

No wait, I still had my ace in the hole. After these picnics they always go back to someone’s house and sit around a bonfire in the backyard. Brother X and I tell stories about New York, and trade barbs about each other. They love that. They all just sit back laughing as we tell the most outlandish stories we can think of. It’s always the high point of the weekend, but Brother X couldn’t make the trip to Ohio this time. So, it was just me telling them my jokes as we sat around the fire. That saved Paul a lot of firewood, as everyone left quickly. I guess they all had church early in the morning.

I left Ohio with my Aunt Jane and two of her daughters, Debbie and Linda. (Another good Catholic, Aunt Jane has got 7 more kids back in Johnstown who couldn’t make the trip.) We went back to Johnstown so I could catch my train back to Lancaster early the next morning. Debbie and Linda had to work the next day, so I stayed overnight at Aunt Jane’s place, which turned out to be the buckle in the Bible Belt. My room looked like the Pope’s private prayer room. There were rosary beads hanging off anything that even resembled a hook. There were electric votive candles and statues of Jesus, the Virgin Mary, and almost every apostle. Crucifixes were everywhere, and I think the ceiling was painted by Michelangelo. The bathroom had a holy water font.

Amazingly, I slept very well, despite the fact that the bed kept spinning around, and Jesus was watching me all night. 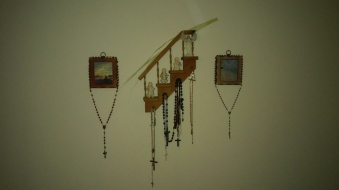 Peace & Love, and all of the above,
Earl

One thought on “Buckle Up for the Bible Belt”