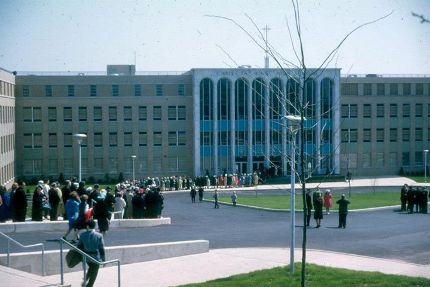 My high school showed a total lack of consideration by scheduling their 50th Anniversary Reunion on my friend Marianne’s birthday.  Her party is always one of the best of the year, and I never miss it.  Both events were scheduled to begin at 7 p.m.  I decided to try and do both.

My plan was to arrive at the Reunion at 7 p.m. on the dot.  Then I would hit the bar, drink champagne, eat jumbo shrimp, and scan nametags to see if I could find anyone I knew.  I could only remember the names of 4 of my classmates, so mainly I was going to eat and drink and attempt to perform the set I had never been allowed to perform in the classroom.  If you wanted to be a stand-up comedian, Catholic school was the worst place to practice.  You could only tell one joke before you found yourself out in the hall nursing the bruises from the pointer they used to beat you black and blue.  I had 8 minutes of jokes.  A tight 8-minute set would be enough to get you booked in 100 comedy clubs across the country.  Since they were all Catholic jokes, it might also get me bounced from my own High School Reunion, but I was only planning on staying for a half hour anyway.

My back up plan, if I didn’t find anyone to tell my jokes to, was to drink and eat for a half hour and then head to Marianne’s party.  I figured if I made all the train connections okay, I could be there by 9:45, fashionably late.

I thought that getting to my old High School would be easy.  Amtrak took me to Penn Station without any problem.  Then I had to walk to Herald Square to catch the M train and take it to the last stop, Metropolitan Avenue.  The school was right there.  Easy, peasy.

What’s that Robert Burns said about “the best of plans?”  They often gang a glee, with gang a glee being Scottish slang for getting completely fouled up.

My arthritic hip doesn’t bother me too much when I walk, but it hurts like hell going up or down stairs.  So, getting from train level to street level at Penn Station, carrying an overstuffed knapsack was where my plan started to gang a glee.  Then I had to walk a few blocks to find the entrance for the M train.  Once I found it I had to go down flight after flight of stairs to get to the train platform, which seemed to be just a little bit from the center of the earth.  When I got there, I saw the notice that said the M train did not stop there on weekends.  I had to take the F train to Delancey Street and transfer there.

It was rush hour and the F train was packed, but I squeezed in and took it to Delancey Street.  Now I had to go from the subway to the elevated line, so I had to climb flight after flight of steps to get to the M platform.

That train was also packed, but it got me to Metropolitan Avenue a couple minutes before 7 p.m.  The school is at the bottom of a 4-story hill.  I limped down the hill and finally marched triumphantly through the door and straight to the reception desk.  There were still some name tags spread out on the table and I found mine and asked the lady behind the table where the bar was set-up.

She informed me that before the bar opened up, there would be a prayer service on the 3rd floor.  By this time my hip was really hurting.  Still, I would have climbed the two flights of stairs for champagne and jumbo shrimp, but I’m a card-carrying Agnostic, and I certainly wasn’t going to climb 2 flights up and then 2 flights back down for a prayer service.  It didn’t matter to me if all they were praying for was my bad hip, I activated Plan B.

I spun around and like Jack and Jill, I went back up the hill and proceeded to the train station.  Once on the train, I texted Marianne to let her know what happened and to tell her I was on my way.  I got to the party around 8:45 and it was already in full swing.  As soon as Marianne saw me, she threw up her hands and announced to the room, “Earl is here.  It’s time for our prayer service.”

Fortunately, the altar was a 6 ft. ski with 4 shot glasses permanently glued to one side of it.  I willingly lined up behind a full shot glass with Marianne and two other people, and participated in the service.  Immediately, my spirits were lifted.

One thought on “Welcome Class of ’66”