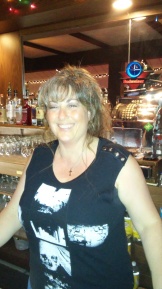 You talk about your woman, I wish you could see mine,

Every time she starts to lovin’ she brings eyesight to the blind.

I just spent another weekend in New York, and, as usual, I partied.  I went to a Mavericks concert at the Beacon Theater with my friend Maria, who must be the band’s #1 fan.  I went to a Country Dance with my friend Joan.  I didn’t do any dancing, as I just enjoyed the music and kept Anna, the barmaid, very busy.

I did do something completely different this weekend, though.  I was an umpire at a Beeper Softball Game.  I never heard of Beeper Ball before, but Brother X schooled me on the finer points of the game.  He also informed me that our Dad helped invent the game.  My Dad was legally blind the last few years of his life, and he used his telephone company contacts to get some people at Western Electric to develop a beeping ball, so that blind people could play ball sports.  They made the first beeper ball out of a softball and some parts from a Princess phone.

Brother X and his wife are both former presidents of their local Lions Club.  I knew that the Lions were involved in charity work, but, now, I found out that they are really all about charity work, especially helping the blind.  Last year my brother’s chapter was able to purchase a seeing-eye dog for one of their town’s residents.  Thanks to owning the dog, he was able to participate more fully in life, and even joined a Beeper Ball team.

The ball beeps so that the blind batters and fielders know where it is.  The bases also emit signals so that the batters know where to run when they hit the ball.  There are only two bases, which are both in foul territory to avoid collisions with runners and fielders.  They are located 90 feet from home plate, about 10 feet outside the foul line.  There is no second base, because there is no need for one, and the batter can run to either of the two bases after hitting the ball, so there is no advantage for left-handed batters.  If the batter gets to the base before a fielder comes up with the ball, it is the equivalent of a home run.  If a fielder comes up with the ball before the batter reaches a base, it is an out.

As a base umpire, it was my job to raise my hand when the runner reached the base.  The field umpire raised his hand when a fielder came up with the ball.  So, if my hand went up first, the team scored a run.  If the field umpire’s hand went up first, it was an out.  The players all wear blindfolds so that the “legally blind” and the 100% blind are all 100% blind.  The only ones who don’t wear blindfolds ate the pitchers and catchers, who are sighted.  The pitchers are on the same side as the team at bat, so they’re not trying to strike anyone out.  They’re trying to serve up good pitches, and they yell “Ball” when they release the ball so that the batter knows the ball is on the way.  Then they listen for the beeping and swing at it.

There were officials keeping track of everything, but I don’t know the final score.  It didn’t matter to me.  The players were all winners.  It showed in all their faces.  They were happy to finally be able to participate in a game they loved.

My Dad’s little idea to help the blind participate in ball sports has really taken off and there are now beeper softball, basketball, and soccer leagues.  My brother and sister-in-law’s efforts with the Lions Club has also done much to help the blind.  Now, I had a little chance to help the cause, too, by waiting at first base and raising my hand when the runners got there.  Like John Milton said in his poem, On His Blindness, “They also serve who only stand and wait.”

3 thoughts on “Eyesight to the Blind”