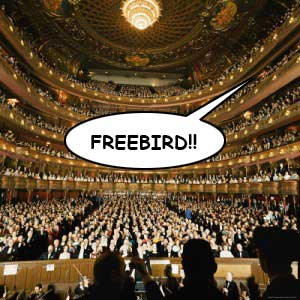 Last week there was a concert at Clipper Magazine Stadium.  Since the stadium is only 2 blocks from my house, I figured I might be able to hear it from my backyard.  When I heard them tuning up in the afternoon, I knew that I figured correctly.

I called Debbie to see if she was interested.  She was, so I set up the Scrabble board in the backyard and put some beers in a cooler.  I really should have grilled some “tailgate” food, but I settled for just snacks.

The opening act was Jack Broadbent.  I never heard of him.  I went on YouTube and listened to one of his songs.  I wasn’t crazy about it.  When he came on he played relatively quiet music and we couldn’t hear it too well.  I didn’t care.  Not only was I not interested in his set, but Debbie was beating me at Scrabble.  It was a chilly night, but I was breaking out in a sweat.  Debbie never beats me at Scrabble.  It’s not that I’m so good.  It’s because she is so bad.  She can’t spell worth a damn and would probably lose to a competitive eight-year old, but she was beating me.  I had all consonants, and I could only make short words where I could find a loose vowel.

Then Frampton came on and the volume increased.  We heard everything except that funky low-volume guitar stuff he does with that joystick in his mouth during “Do You Feel Like I Do.”  I grabbed my cell phone and went to YouTube for the “live” video.  We watched him play.

Debbie, super impressed, asked me if the signal was coming directly from the Stadium.

“Yeah,” I said.  “I went to the stadium earlier today and put a satellite dish on the roof.  How many beers have you had?”

It took her a few minutes to realize that I was joking.  I knew then that I didn’t have to sweat the outcome of the Scrabble game anymore.

You may be wondering why I was worried about a stupid game.  Let me give you some background.  Debbie usually loses by 100-200 points, and I am so confident that she will lose, that I once made her a standing bet.  If she ever beats me, I will do ANYTHING she asks me to do.  ANYTHING!!!  If she asks me to go to the ballgame wearing a tutu, I will do it.  Of course, I won’t do it, because I don’t plan to ever lose to her, but when Frampton came on she was still winning.  Fortunately, by the time he finished his set, I was way ahead and drawing away.  Waa Waa Waa Waa Waa Waaaaaaa.

Then the closers came out – Lynyrd Skynyrd, and by this time the Scrabble game was over, so we just sat back and enjoyed the music.  Well, I sat back and enjoyed the music.  Debbie got up to dance.  Well, maybe I should have placed the word dance inside quotes.  Her dancing is worse than her Scrabble playing, but better than her singing.  When she sang along on “What’s Your Name?” I wished that she would “Gimme Three Steps” towards the door.

They closed the show with Freebird.  I didn’t have any fireworks, but I lit a few tiki torches and we waved them in the air.  Then we polished off the beers.  The first backyard concert of 2016 was a big success.  Sweet home, Pennsylvania.