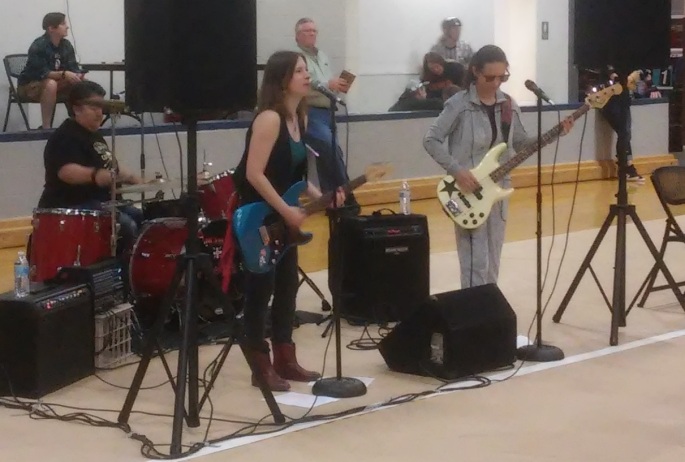 Down at Dino’s Bar N Grill

The drink will flow and the blood will spill

And if the boys want to fight you better let ‘em. -Thin Lizzy

The 2017 Women’s Flat Track Roller Derby season has begun and I was there on Saturday to cheer on the Dutchland Rollers. There’s usually a little pushing and shoving, a bit of bumping and a whole lot of skating going on. It’s a contact sport, but it’s usually quite friendly. All the girls are amateur skaters and nobody’s out for blood. Usually.

On the very first jam of the game, one of the Wilkes-Barre/Scranton Roller Radicals gave Dutchland’s “Genghis Bon (#302)” a vicious elbow to the mouth, and the Roller Radicals quickly grabbed a 16-0 lead. That didn’t last long, though. Bon picked herself off the floor and Dutchland fought back. Bon, “Mega Pixel (#7),” “Harper’s Fury (93),” and “Metaphor Shadow (#17)” led their team to a crushing 205-98 victory in the first game.

Amanda and the Noise provided the half-time entertainment, and also performed in between games. They performed a number of original songs and a cover of the Go-Go’s hit We Got the Beat. They had the beat all right, but the Dutchland team gave the Roller Radicals a severe beat down in the second game. This time “Mugz Shots (#13),” “Scarface O’Hara (#26),” “Woomerine (#4),” “Alto Hurtya (#28), “Mama Moscato (#750), and “Mega Pixel (#7)” were the big heroes, as the Dutchland team absolutely destroyed their opponents 347-108. Rookie “Mugz Shots” really got the crowd buzzing when she scored 39 points in one of the jams, the most points I’ve ever seen scored by a jammer in one jam. Jammers score 1 point for every opponent they lap. To score 39 points she had to lap the other team 8 times during the short 2-minute jam. That’s not skating. That’s flying.

The after-party crowd at 551 West was thrilled to see that video of the team’s victories was prominently featured on local TV, and I was thrilled to hear that “Vanitti (#29)” is thinking about coming out of retirement for a few games this fall. I guess that after the rock ‘em sock ‘em action of Roller Derby, merchandising just isn’t exciting enough for her.

So, since I moved here, I’ve learned that Lancaster is home to great Minor League baseball and Women’s roller derby action. Then I saw a Roller Derby fan wearing this T-shirt. Now I want to find out where the local Rugby team plays.