I recently read David and Goliath by Malcolm Gladwell. He explains how the underdog David, should have been the odds-on favorite, because he had a weapon, a slingshot. Goliath was much bigger and stronger but needed for David to be within arms distance. David had no intention of letting the giant get that close, and he felled the big man from a distance with a stone and a slingshot. It was like that classic scene in the Indiana Jones movie when Indy is confronted by the fierce swordsman, who shows off his skill with the sword for about 15 seconds before Indy just pulls out his gun and shoots him.

Unless you have superior weapons, though, the giant always has a big advantage. Remember how Andre the Giant would wrestle against an entire group of midgets and always emerge victorious? Or try to think what it would be like if you were playing on a high-school basketball team and LeBron James showed up to play for the other team.   Imagine a high-school wrestler having to face Hulk Hogan. If you’re going to face a giant, you need a superior weapon.

This past Saturday, my favorite Women’s Flat Track Roller Derby team, The Dutchland Rollers played against a team from Wilkes-Barre/Scranton in their home opener for the 2018 season. The Dutchland All Star team had their skates, their elbow pads, their knee pads, helmets, and wrist protectors, but they were up against Goliath, and they didn’t have any slingshots.

I knew something was up when I got to the Overlook Recreation Center where the games are held. It usually takes just a few minutes to get a ticket and find a seat. This time there was an extremely long line that went all the way to the end of the parking lot. I waited on line for half an hour, and they were 10 minutes into the game before I finally got in. The first thing I did was look up to the scoreboard.

The score was 0 to 99. I couldn’t believe it, until I watched a few jams and saw the reason for the lopsided score. Goliath, in the form of Vanessa Sites was skating for Wilkes-Barre. Vanessa, who is nicknamed V-Diva, is a transgender superstar in the sport. She used to play for Gotham, the New York Roller Derby team where she helped them win the Championship 5 years in a row and most recently she skated with them when they won the World Cup of Women’s Flat Track Roller Derby in a competition held in England.

In Roller Jerby, a jammer wearing a star on their helmet, is the only one who can score points. They start at the back of the pack and must work their way to the front. Then, to score points, they have to skate around the track and lap opponents. With Vanessa skating backwards at the front of the pack, the Dutchland jammers were unable to get past her. If they did somehow manage to get by her, she then moved to the back of the pack and prevented them from scoring. 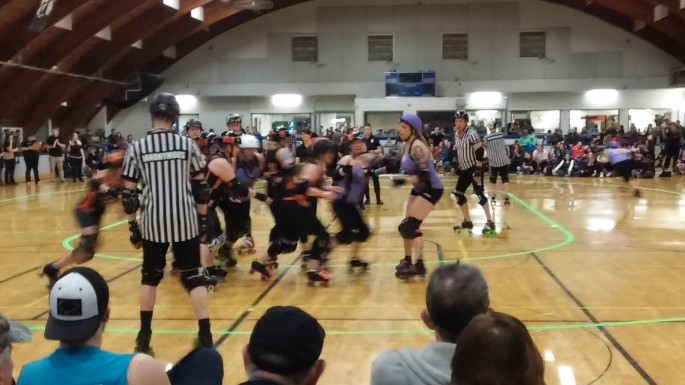 Many times, after skating around the track, the jammer will slow down when they reach the pack and plan whether to attempt to pass on the left, right or center. When Vanessa wore a jammer’s helmet she wouldn’t slow down when she approached the pack. She would just hit it like a bowling ball and scatter Dutchland players like bowling pins. If the pack was on a turn, she would just take off before the turn, do a long jump across the infield and land at the front of the pack, boom 5 points for passing everyone. This move was so spectacular that even the local fans applauded. Mega Pixel, the captain of the Dutchland team does a similar move, she just doesn’t get quite as far in her leap and usually has to wrestle past an opponent or two at the front of the pack.

Normally the players skate every other jam, with substitutions being made after each jam. Vanessa skated almost every jam, and just kept knocking the Dutchland jammers off the track or onto the track. The Dutchland All-Stars didn’t have any slingshots, but they did have plenty of grit, and they fought on bravely. They double and triple teamed Vanessa and forced her to commit fouls that sent her to the “Dutch Oven” penalty box. Eventually, the Rollers got rolling and scored some points. The final score was 74-281, a respectable comeback for the Roller’s All-Star team, who never quit.

Each team actually fields two teams on an event night, and the women who didn’t get to skate in the first game come out for the second game. In the second game Wilkes-Barre came from behind to beat the Rollers, but without Vanessa, it was a much closer game. In honor of St. Patrick’s Day, in between games, a dancing exhibition was put on by a local school of Irish Step Dancers. That’s something I know a little bit about, because my friend Marianne’s daughter Jessie Driscoll is a top class Irish Step Dancer, who has toured all over the world including performing in shows in China. The exhibition reminded me of when Jessie was just starting out on her career decades ago. I hope that some of these little girls will someday achieve the level that Jessie has. 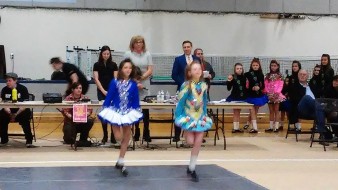 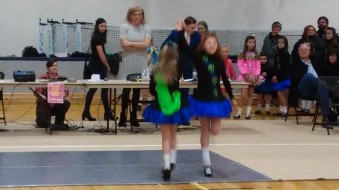 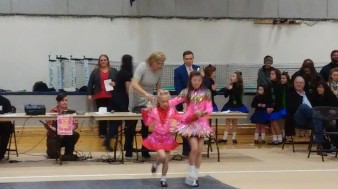 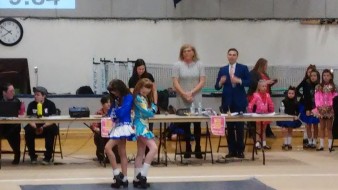 As always, the after party was a lot of fun, and I got to talk to Drew Anderson, who was the weatherman on the local TV station, WGAL, but is now running for Congress. He had been a guest announcer at the games. He’s the one wearing the tie. He seemed like a nice man, and I hope he doesn’t face a Goliath in the election.

2 thoughts on “When the Going Gets Tough…Grab a Slingshot”