I try to live my life like a social butterfly flitting casually from one joyous moment to the next, but this is not always possible. Like the song says, “Into each life some rain must fall.” Recently, my Uncle George passed away. He was 85, a good man, a loving husband and father, a deeply religious man, and, in fact, my Godfather.

I attended the memorial mass in Ohio with my relatives. I travelled there with Brother X. It was heartwarming to find that my relatives all really believed that Uncle George was now “in a better place.” Some small part of me wished that I still had that faith that my relatives hold dear. Brother X does. He’s a Catholic of conviction, who believes strongly in the religion our parents taught us. My brother Kevin is still a Catholic, too, but I think he is more a Catholic of convenience. He did not show any strong signs of faith until he adopted two hyperactive boys and needed a little spiritual help and a Catholic school to help raise them.

I used to be a devout Catholic when I was a child. I was less devout in high school, when girls became more important to me than God. I guess you could say I was a “Cafeteria Catholic” while I was in the service, just choosing a few items that appealed to me and ignoring the rest of the menu. By the time I got my Honorable Discharge from the Navy, I had discharged most of my religious convictions, too. When nothing on the Catholic menu but the sacramental wine appealed to me anymore, I became an Agnostic.

Since I don’t believe in God, the Devil, Heaven, or Hell, I guess that makes me an Atheist, but my basic credo is “I don’t know, and I don’t care.” I don’t desire to be a member of any of the world’s religions, but I do kind of like the Rastafarian drug policy. If I’m wrong about the existence of God, I hope my Mom and her baby brother George are now playing harp duets for God in Heaven and that my Dad is doing the vocals. My Dad loved to sing in church, and he was always the loudest voice in the church. I found out during Uncle George’s Memorial Mass that Brother X takes after our Dad. Standing next to Brother X was like being locked in room with the Mormon Tabernacle Choir.

If there is a heaven, then, I suppose there’s a hell, too. I’m prepared to go. I don’t think I’ve lived a bad life, but I’m sure I would find Heaven to be a tad boring. In Hell, I’d find plenty of my kind of party people, and I’ll bet the place really rocks. If there’s a Rock ‘n’ Roll Heaven, I’m sure that Hell must really have a hell of a band, too (even if the Devil doesn’t play fiddle any better than some kid in Georgia).

George and his wife Miriam, being good Catholics, had a bunch of kids, who had a bunch of kids, who are now having a bunch of kids of their own. The church was packed with relatives, and most of them knew the responses to the prayers and the words to all the hymns. I wasn’t the only one, though, who didn’t know when to stand, sit, or kneel. Like my parents, not all of George and Miriam’s kids followed in their footsteps. Thank God for Atheists, I thought, when I noticed that I wasn’t the only one who looked out of place in a church.

After the Mass we all went to VFW Hall and caught up on what’s been happening in our lives. I recognized all my first cousins and most of their spouses, but had no idea who their kids, and kid’s kids were, but I got introduced to everyone. One was a little girl named C J. She wants to be a paleontologist when she grows up. I asked her how old she was, and she said “8 and a quarter.” Then she asked me how old I was. I asked her how old she thought I was. She sat back, thought a moment, and then said, “You’ve got to be at least 20.” Instantly she was my favorite.

Obviously, it was a sad occasion, but we still had quite a few laughs. Many of the laughs were at the expense of Ohio’s Cleveland Browns, who, according to my brother, are the worst team in the NFL. I know nothing about football other than the Philadelphia Eagles won the last Super Bowl. The only sports I follow are Harness Racing, minor league Baseball, and Women’s Flat Track Roller Derby – Sports that very few others follow. So, I would have little to say, if it wasn’t for Brother X feeding me anecdotes. The fact that the Cleveland Browns had two of the top four picks in the NFL draft that weekend also added to the fun, because nobody in Ohio was happy with the choices they made.

My Cousin Jim from Pennsylvania asked me if I combed my hair with a firecracker. As he is balding, I quipped back that he was the only one of us not going grey. Then everyone joined in and barbs were flying faster than a fly fishing contest on the Allegheny River. Brother X kept feeding me jokes and before long they were calling us Penn & Teller. Later, when Brother X and I got back to the hotel, we polished off the remains of a bottle of bourbon and laughed our asses off recounting all the things that had been said.

The next morning, we headed back to Lancaster and laughed for the entire trip. We stopped in Somerset to pick up cookies for his two grown kids at the Eat’n Park. It seems that they were the kids’ favorite cookies from childhood. While we were there, we took pictures with Jackson, a big elephant statue in the parking lot.

“When I asked for nuts, I didn’t mean these two.” 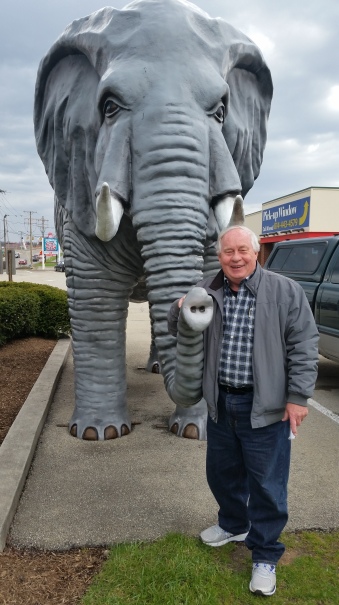 When we got back to Lancaster we went for lunch at Fat Pigs and watched some of the track and field races from Penn State. X is a former cross-country runner, and his son DJ is a track coach, so he’s into that stuff. Afterwards we grabbed another bottle of bourbon and some videos.

We watched The Wedding Ringer with Kevin Hart and laughed ourselves silly when the future father-in-law invited the groomsmen to a game of touch football. The father-in-laws teammates turned out to be Joe Namath, Too Tall Jones, and other former NFL players. The “friendly” game soon became a blood sport when Joe Namath threatened to shove the football up the groomsmen’s asses. That line, and the bottle of bourbon, almost made us fall out of our chairs.

Well, this was supposed to be about Uncle George, but I guess I got sidetracked. I have a tendency to do that. Rest in peace, Uncle George, and, if He exists, may God bless you.

One thought on “Oh My Godfather (Bro’s before Woes)”