Here’s something that probably none of you know, and probably none of you care to know, but I’m going to tell you anyway, because that’s the way I roll.  The area of a racetrack that takes the most pounding is the area closest to the rail, because the shortest trip to the finish line is the trip that skims along the rail.  Calvin Burrell won a few Kentucky Derbies by taking his horse on a path that skimmed the rail the entire mile and a quarter.  If you watched those Derbies, you knew that.  What you didn’t know is that racetracks take special precautions to prevent excessive wear and tear on the inside portion of the racetrack during morning workouts.  They put traffic cones on the track to keep horses away from the rail.   When Racing Form clockers report the times of these workouts, they let the racing fans know that the horse was not allowed to skim the rail because “the dogs were out.”  That means, there were traffic cones on the track to prevent the horses from getting too close to the precious rail area.  I have no idea if the Baha men knew this terminology when they wrote their one hit, “Who let the dogs out,” but I’m just passing this information along to my readers to keep them well informed.

On my birthday last week, Jose Canseco made a guest appearance at Clipper Magazine Stadium in a home run hitting contest against five local amateurs.  Since the five local guys were not major league caliber they put the dogs out.  Traffic cones were placed in the outfield and any ball hit past the cones was considered a home run.  Spoiler alert!  Jose won the contest easily.  Almost every one of his shots went further than the cones, but he only hit a few balls that actually cleared the walls and went out of the park.  Here I should note that it was a humid evening and the ball was just not travelling well.  Jose won the contest, but he was upset that he didn’t show off his power, and man oh man does he have power.  I was only 50 feet away from him, and he looked more like the dinosaur in centerfield than he looked like the other participants.  He was Huge.  I don’t think that he is still doing steroids, but he obviously spends more time in the gym than the library.  So, when the contest was over, he still wanted to hit.  Naturally, they let him.  He just kept hitting until he had whacked enough balls into the stratosphere to make himself happy.

They also had the local Women’s Roller Derby stars from the Dutchland Rollers skating around the stadium and I got a picture with my favorite, Vanitti. 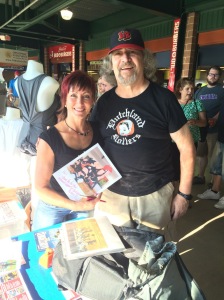 So, that was a good start to my birthday celebration, but it got better.  It was $2 beer night from 6:30 until 8 o’clock.  My activity tracker showed a lot of activity that night between 6:30 and 8, as I raced back and forth from my seat to the beer concession numerous times.

Normally, you can just sit wherever you like, because the stadium is half empty (or half full if you’re an optimist) but not on that night.  In addition to Jose Canseco, and $2 beers, they also gave away complete sets of Barnstormer bubble gum cards, and there were fireworks after the game.  The weather was nice, so the stadium was jammed with the highest attendance they ever had.  Not bad for a team in last place, 10 games out of First Place.

My seat was right in the middle of the row and the family on my right never once complained about having to get up every 15 minutes while I replenished my beer supply.  They didn’t even complain when I got drunk and started messing with them.  The more beers I had the more the guy on the end of the row looked like Danny Glover.  So I kept pointing my camera phone at him asking him to repeat Danny Glover’s signature line from the Lethal Weapon movie, “I’m too old for this shit.”  I took a picture just so you can see the resemblance.  They look very upset in the picture, but that’s just because I caught them by surprise.  They were actually very friendly and nice, and never once called for Security to restrain me.

The guy immediately on my right did his absolute best to ignore me as I got drunk and started joking loudly about everything and everyone in the area.  I kept taking pictures of the giant head that was protruding from the seat right in front of me.  I had a great seat, right behind home plate, about 6 rows back, but I was right behind the largest man in Lancaster.  I kept taking pictures of the back of his head trying to make the fellow on my right laugh.  It took a while but James finally cracked up and we joked together for the rest of the ballgame.

The team is still in last place, but there are advantages to that.  They are adding more giveaways and entertainment.  Last night they had Chad the Mad, from Venice, California, who juggled 3 running chainsaws in between innings.  They also had fireworks after the game and after that the premier of a show that will be airing on Fox this Fall called “Pitch.”  The show is about the first woman player in Major League Baseball.  I really enjoyed the commercial-free premier of the show.  I also enjoyed another $2 beer night, and the Barnstormers won big, so it was a great night.

Oh, and before the game, they let the dogs out again.  Well, it was just one dog, Percy, the Frisbee catching wonder dog, who is a fan favorite and a local legend.  Woof Woof.

One thought on “Who Let the Dogs Out?”