To my great surprise, we were there in a half hour, and it was beautiful. Who knew the mountains were so close? Well, anyhow, after chasing the trail dust away with a few cold beers, we decided it was time to commune with nature. Everyone wanted to walk down to the lake, so we filled up some plastic to-go cups with beer and headed off to the lake.

There was something about the beauty of the woods, and the beer, that turned us all into tree huggers. Heck, we went beyond tree hugging. On the way to the lake we actually stopped to pet a caterpillar which was crossing the road and we made sure he made it across safely. Well, actually, the rest of them stopped to pet the caterpillar. I was just using it as an opportunity to catch my breath from all this walking in the woods.

It was downhill all the way to the Lake, but I knew that meant that the return trip had to be all uphill. “Don’t worry about that,” Denise said. “We won’t take the road back. We’ll take the stairs.” That didn’t offer me much hope. “If she had said, “We’ll take the escalator on the way back,” that would have pleased me a lot more.

On the way to the lake we passed an open-air theatre, where the Beach Boys had played back on September 5th.

We continue down the mountain and eventually got to the lake. I got this picture off the Internet, but it shows the exact view we had. The four of us squeezed onto that bench by the red canoe in the lower right-hand corner of the picture and just soaked in Nature.

This is what the lake looks like in the summertime.

Then, having soaked up enough nature, and all our beer, we decided to head back to the house. Here’s a peek at the bottom of the “Stairs,” that Denise was promising would make our jouney back so easy. 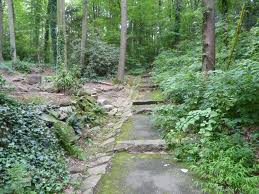 That’s when I realized that Mike and Denise are both part mountain goat. They scampered up the stairs as I looked around hoping to see a taxi stand nearby. No such luck. Fortunately, Debbie’s a city girl and she wasn’t able to get too far ahead of me as we both climbed the mountain. By the time we got back to the house, Mike and Denise had refreshed the drinks, prepared snacks, and were listening to the local commercial free radio.

The radio station from the University of Pennsylvania was playing a listener-suggested countdown of the 885 greatest songs of all time. Debbie and I got back from the lake in time to hear the top 5. The Pennsylvanian audience had a significantly different opinion of songs than the New Yorkers I grew up with. Born to Run, Layla, and Stairway to Heaven didn’t even make the list, though Bruce did have the top song with Thunder Road.

After that list, the fun really began, though. The radio played a countdown of the 88 songs that their audience had voted as the worst songs of all time. We sat out on the enormous deck that circled the house, drinking beer and singing along to some classic bad songs, and some songs that the radio had itself destroyed by playing them way too much back in the day, songs like Feelings by Morris Alpert, and You Light up My Life by Debbie Boone.

Other songs on the list just didn’t pass the test of time, Paul Anka’s Having My Baby, Richard Harris going on and on about MacArthur Park, or Tiny Tim’s version of Tiptoe Through the Tulips. It was some bad music, but it was great radio. We were hooked.

We were even up and dancing to some of the classic bad songs.

We did the YMCA.

We did the Macarena.

None of us knew how to do the Achy Breaky Heart, but we tried.

We let the dogs out, too.

It was so much fun that we kept postponing dinner to listen to more of the worst. We wound up listening to all 88 songs before we ventured back down the mountain for dinner. Then, as we walked, we sang every song we could think of that should have been on the list but wasn’t. They had forgotten all about, The Purple People Eater, They’re coming to take me away, and Papa Oom Mow Mow. Instead, the Pennsylvanian audience had made Jefferson Starship’s They Built This City, the #1 worst song of all time. If this was a horse race, there would have been a steward’s inquiry.

It was downhill all the way to the Restaurant, and it was longer than the walk to the lake. Knowing that the return trip had to be all uphill, I inquired at the Restaurant, if there were any Sherpas for hire in the neighborhood, to help me get back up the mountain. Funny thing, though. A few frosty beers and some nice steaks made it an interesting climb. I stopped occasionally, under the pretext that I thought I saw a reckless caterpillar on the road, but I did manage to make it back to the house without needing oxygen or a Sherpa rescue team.