“Every picture tells a story, don’t it?” 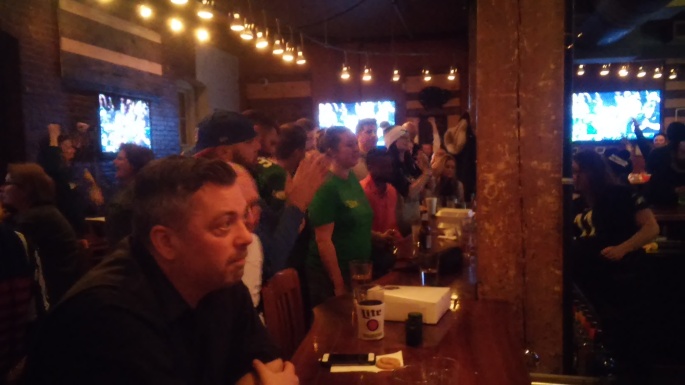 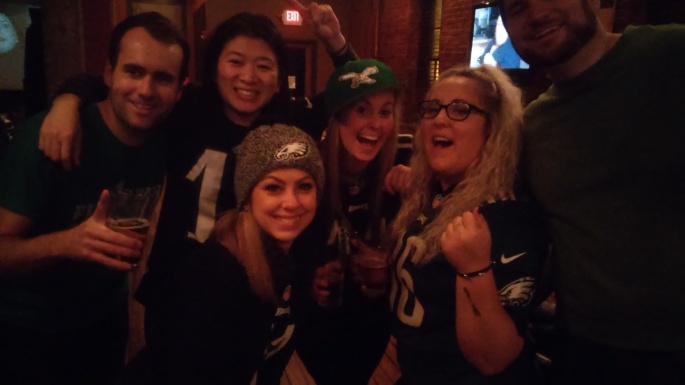 It was the best of times…Philadelphia Eagles fans 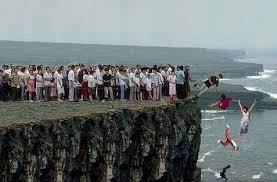 It was the worst of times…New England Patriots Fans

I got to Fat Pigs Sports Bar in time to grab the next to last bar stool.  The seat next to me was the only one left.  A man came in and asked me if anyone was sitting there.

Everyone else was wearing something that indicated that they were an Eagles fan.  His shirt said, Just Do It.  So I said, “That depends.  What team are you rooting for?”  He said the Eagles, so I offered him the seat.  Roger was from Uganda, and had lived for a short while in New York, and then went to school in Minnesota.  It made for interesting conversation.

The Eagles were having a dream season until their quarterback, Carson Wentz, got hurt and the dream became a nightmare.  Then the backup quarterback, Nick Foles, rose to meet the challenge, and the dream continued all the way to Super Bowl LII.  The Eagles scored first and led for most of the game.  The dream was very much alive.  Then, a few hours later, the Patriots had the ball with just seconds remaining in the game.  They were trailing by 5 points and everyone knew what was coming next, a Hail Mary pass to the end zone.  Sure enough, on the last play of the game, the Patriots had their giant receiver, Gronkowski, standing in the end zone, with a swarm of little green men surrounding him.  Tom Brady threw a perfect pass that was headed right for the outstretched hands of the mountain, who towered over his defenders.  But Eagles can fly.  The swarm flew up and batted the football away from the big man.  The Eagles won the Super Bowl 36 – 31, and Nick Foles was voted the MVP.  Pennsylvania was party town.

I stuck around for the after party, but after a while my camera got a little drunk and started taking some very blurry pictures, so I knew it was time to go home.

Congratulations to the Philadelphia Eagles.  This season, you gave all of us in Pennsylvania an opportunity to fly like an eagle.  Thanks. 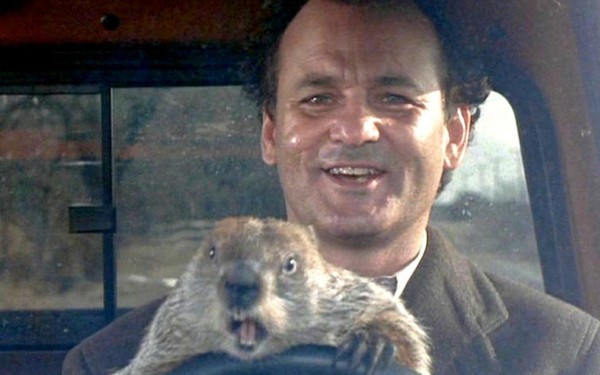 The celebrated groundhog in that movie, Punxsutawny Phil, is still making his prognostications and today at Gobbler’s Knob the rotten little rodent saw his shadow and predicted 6 more weeks of winter. That normally would not sit too well with Pennsylvanian’s, but this year we’ve got bigger fish to fry. On Sunday, the Philadelphia Eagles play the New England Patriots in the Super Bowl. So, a long winter, or an early spring is inconsequential to a Super Bowl victory by our Eagles.

This Groundhog Day was special to me, though. It was also First Friday, a day when Lancastrians (that’s what we call ourselves) support both their local musicians and the local purveyors of alcoholic beverages. I chose to go to a local sports bar, Yorgo’s, because some of the Dutchland Rollers were scheduled to make an appearance there. The Dutchland Rollers are the local Women’s Flat Track Roller Derby team, and I’m a big fan. Watching them brings me back to the days when Charlie O’Connell and his San Francisco Bay Bombers used to school the New York Chiefs at the Armory in New York.

I settled into a comfortable bar stool and glanced up at the TV. It was like Groundhog Day for me, as I was immediately brought back to relive my high school days. My old High School basketball team, Christ the King, was playing against Brother X’s old High School Team, Archbishop Molloy. What are the odds that these two New York high school teams would be featured at a Pennsylvania sports bar? Plus, I graduated from Christ the King 52 years ago. Sunday is Super Bowl 52. I looked around to see if Bill Murray or Rod Serling was in the bar. I was surprised that I didn’t see either of them.

Many years ago, when I was a bellhop at the Vista International Hotel at the World Trade Center in New York City, I had the pleasure of showing Bill Murray to his room. He checked in late one night and was probably coming from a Saturday Night Live rehearsal (or, more likely, an after party). He was upbeat and cheerful, telling me jokes and just being an all around nice guy. He was impressed with the wood paneling in the elevator and asked me what it was made of. I didn’t know. Afterwards I looked it up just in case he ever came back to the hotel. Alas, he never did, and the hotel was destroyed on September 11th. If you’re reading this Bill, it was a cherry wood veneer.

Back when I went to Christ the King, we had a very good basketball team, but Molloy had a better one, and they beat us every time we played each other. (Just in case you’re wondering, I wasn’t actually on the team. I was a cheerleader. My athletic ability back then was the same as it is today, nonexistent.) So, I was not surprise that the CK Royals trailed the Molloy Stanners throughout the game. But then, with about three minutes to go in the game, the Royals popped a few three-point shots and took the lead, and they held it to the end winning 64 to 61. I cheered like they had just won the national championship. The rest of the people in the bar looked at me like I might have been celebrating First Friday a little too long.

I went back to eating the delicious steak dinner I had ordered, and then I saw Mega Pixel and some of the Dutchland Rollers skaters. We talked for a while and then had a waitress snap our picture and I wished them success in the season ahead. I’m sure that picture will wind up on their website, www.dutchlandrollers.com, so look for it. All in all, it was a very good day, and not one I would mind reliving over and over and over and over.