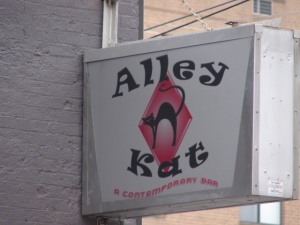 It wasn’t the first Friday of the month, but it was Friday night, so I decided to check out 4 more bars in Lancaster.  I started with the place that’s billed as the “Friendliest Pub in Town,” Molly’s Pub.

Molly’s Pub was about a 6 block walk from my apartment, and it is in a quiet part of town, with no other bars nearby.  It’s across from one of the big parks in town.  They have a few tables outside, but I was by myself and on a scouting mission, so I headed indoors.  It looked very much like an Irish Pub, with a crowd of people dining at tables indoors.  There was only one open space available at the bar and I took it.

About a third of the people at the bar were eating, and about a third of them were having Calamari.  I didn’t know that Irish folk ate Calamari.  I certainly don’t.  Calamari, anchovies, and canned peas are three items I will only eat if I am shipwrecked on a desert island and that is all that washed ashore.  But the patrons at the bar were obviously relishing the dish.  Different strokes for different folks.  Fortunately, there were some people at the bar eating Irish Stew, so the place kept it’s Irish atmosphere.  I didn’t eat there, but I did stay for a few beers and the crowd was friendly.

The newly-opened Federal Taphouse was my next stop and, even though it’s enormous, it was packed.  There was absolutely no room at the bar, so I made a quick exit.

I made Yorgos my next stop.  I had been there before in the afternoon.  The beer and food was good, and there were quite a few nice looking women in the place, which always adds to the atmosphere.  Tonight, it was packed with college kids, but I managed to find a place to squeeze in at the bar.  Most of the customers were drinking beers and pounding shots.  I felt like a chaperone at a frat party, so I only stayed for one beer.

I headed for an out-of-the-way place I had discovered earlier in the day while walking to the dry cleaner.  It’s only a block from my apartment and it’s called The Alley Kat.  It was fairly crowded, but I found an open bar stool and quickly occupied it.  The crowd there was quite varied, and there were enough people my age for me to feel comfortable.  The Yuengling on tap was just $2.75 a pint.  That made me even more comfortable.

The barmaid asked me if I wanted to see a menu.  I wasn’t really hungry as I had eaten dinner before going out, but I decided that a little snack might hit the spot, so I ordered some mini-burgers.  They were absolutely delicious.  Cheap beer, nice crowd, great inexpensive food, just a block from my house – I quickly ranked it as one of my favorite place in town.  I stayed there for quite a few beers.

Naturally, all this liquid led to a pit stop, and on my way to the gent’s room I passed a table of young ladies, who were all wearing long bright pink boas.  One of them was wearing a white veil and they were all having a great time.  It was obvious that this was part of a bachelorette party, so as I walked past I said, “Happy Halloween.”  They stopped me and told me that it wasn’t a costume party.  They were raising money for the future bride’s wedding.  They asked me if I wanted a “suck for a buck.”

I had already decided that this might be one of my favorite bars in town, now I was positive.  With the speed of a magician, I produced a roll of singles and quickly handed one of them to the girl in the veil.  She reached into her goodie bag and gave me a lollipop.  I laughed out loud at their little Trick & Treat.  So, I actually got a suck and a yuck for my buck, a pretty good deal, even if it wasn’t the deal I had pictured in my dirty little mind.

A couple more beers and my tank was full.  I headed home with a big smile on my face, and a lollipop stuck right in the middle of it.