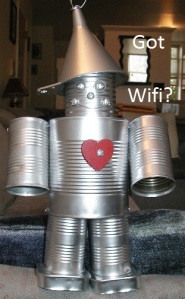 I moved into my new apartment at the motel last Monday.  I expect to be here for a month or two until I find a more permanent residence.  Too bad Super Bowl isn’t coming up soon.  This place would be awesome for a Super Bowl Party.  There is a refrigerator right smack dab in the middle of the room.  That seemed strange, when I first saw it, but the first time I had to get up for a beer, and didn’t even have to get up, I was sold on the idea.

It’s only one and a half rooms, but this place has everything, including the proverbial kitchen sink.

There are only two problems, the Wifi is not very reliable, and the wiring looks like it was done by either the Marx Brothers or the Three Stooges.  It is just a series of extension cords plugged into surge protectors that wind their way completely around the room.  I have no idea which wall switches control what.  To turn off a light, I just unscrew the bulb a little.  There is a toaster oven, but I haven’t tried that yet.  There are three all-you-can eat buffets within walking distance. Besides, I’m afraid that turning on another appliance would blow a fuse, if the wiring is indeed actually connected to a fuse box.  I count my blessings that the big TV and refrigerator both work at the same time.

The apartment WiFi is spotty.  Sometimes I have a signal.  Sometimes I don’t.  Fortunately, the motel WiFi always works, so when mine goes out and I have to do something on the Internet, I just take my laptop over to the front office of the motel.  I can also grab free coffee, juice, and donuts there, so sometimes I just pretend I lost my signal.

This place is a real man cave, and like I said, would be great for a Super Bowl party.  I asked for an apartment on Friday, and one suddenly became available on Sunday night.  I found it strange that the last guy living here vacated the place so suddenly.  When I walked in, I half expected to see a chalk outline on the floor.

Another reason this would be a great place for a Super Bowl party is noise suppression.  Last night, I decided to stay home and watch the Stakes races from Pocono Downs.  It was the first night that I didn’t go out and I was amazed by the amount of noise the walls could suppress.  Almost all of it.  Almost.  The volume control on my giant TV swallowed up the rest.  I hardly even knew that the couple in the next room were fighting, making up, fighting again, and making up again.

Plus, as a backup, in case the TV goes out, there is a bar almost right next door.  They’ve got good food, cheap beer, and great barmaids.  Hey, that might even be better than here for a Super Bowl Party.  They seat about 25.  I just wish they had free Wifi.